We’ve been exploring Ireland these past couple of weeks, a somewhat leisurely tour of the Emerald Isle starting in Dublin on the first of October. Three days in Dublin where we took a walking tour and a bus tour along with wandering the streets on our own. Then a train ride across to the west coast at Westport for two days followed by two-day stops in Galway, Ennis, Killarney, Kinsale, and finally Belfast. We learned much about the history of the Fair Isle, enjoyed the lush greenery, the stark Barrens, the breathtaking mountains. Our hosts—B&B owners, drivers, tour guides—showed us the beauty that is Ireland.

And yet the one sight that has left the deepest impression is one of division, deep-seated animosity, and maybe a bit of hope: The “Peace Wall” in Belfast city.

Many of us remember “The Troubles” in Northern Ireland. I’m not certain of the timeline, our “Black Cab Tour” driver in Belfast referred to it as “thirty-five years of violence.”

I remember reading about the bombings as far back as my high school days in the early 70s. I remember Bobby Sands’ hunger strike and death in 1981. I remember the Good Friday Agreement in 1998.

I suppose I assumed “The Troubles” were in the past, although some will never feel that way and it seems that Brexit may stir the pot once again. Maybe it’s my naïveté or simply my distance from the strife, but I didn’t anticipate seeing—FEELING—the animosity that still exists along with its physical representation known as the “Peace Wall.”

You see, Belfast is still a divided city. On one side live the Protestants, supporters of British rule. Murals depict their heroes and victims of IRA terrorists. A memorial tells the tale of bombings, abduction, and torture in graphic details: See what the IRA has done!

A trip to the other side gives a far different point of view. This is where the Catholics live. They support reunification of Ireland. They want the British invaders out.

Our taxi driver tells us how Catholic children play on one side of the wall, Protestant children on the other: a few meters apart, but separated by an insurmountable barrier.  He tells us that although Catholics and Protestants may work side by side, they do not mix socially. 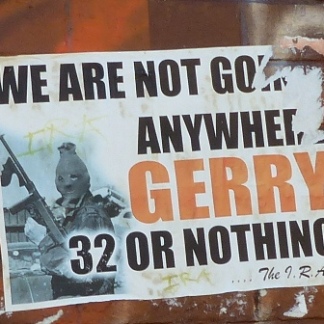 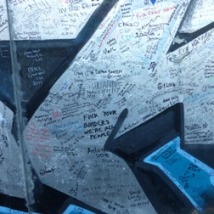 Standing at the Peace Wall, one feels the weight of a fragile existence. The graffiti-covered wall is a plea for peace and understanding but it seems as if everyone is holding their breath, resentments building like so much pent-up steam, waiting for the other side to step out of line.

I don’t know if our driver is Catholic or Protestant—his words seem carefully measured so as not to reveal his beliefs. He worries we will think badly of his city. He is in his fifties maybe, has lived through the troubles. But I can feel the sorrow, the love of his homeland and the unspoken wish for justice and peace.

Standing at the Peace Wall I want to cry. I want to relieve the pressure and the sadness, the struggle to comprehend a battle that still continues, an animosity that still exists. How can a people live divided like this? I know, but I can’t understand.

Belfast is a beautiful city. But that wall…that wall that speaks for peace yet stands for intolerance haunts me.

2 thoughts on “Ireland: Beauty and Bitterness”