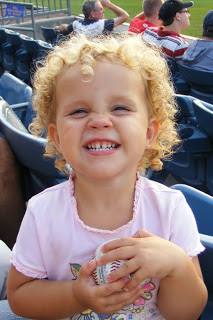 The sky threatened but we remained optimistic: A first baseball game for Kelsey couldn’t possibly be rained out. We’d chosen an early game – 5:00 – so Kelsey wouldn’t be up too much past her bedtime. So there we stood, under the roof at the ball park, watching the drizzling rain. Music played: “Riders on the Storm,” “Who’ll Stop the Rain,” “Don’t Rain on my Parade,” …you get the idea. Cute. Finally at about 5:30 the players began warming up and the starting lineups were announced.

“Red!” she’d shout as the light turned. “Green! Go!” as it turned again. “Lellow! verrrry slow!” at every ……single…….light. I’ll bet she was asleep before Daddy got the car seat buckled. It was a night to remember.

2 thoughts on “Take Me Out”